A little history... I was born in 1980, I was there at the beachhead of the game resurgence that came with the Nintendo Entertainment System. Video games have been a part of my life since I've had the ability to recall memory....

In 1988 my father suffered a severe head injury while at work. The result of the accident put him into a coma for 6 weeks and when he came out of it, half his body was paralyzed and he was severely brain damaged. He would never be the same again.

For four years he was in and out of different rehabilitation hospitals. The hope was that some functions could be restored. While he did make progress, it was limited and it was ultimately decided the rehabilitation had reached it's conclusion. I was 12 or 13 when my father came home to us. A shell of his former self.

At 13, just entering puberty I already had the odds stacked against me socially. I was always a chubby kid, but at this point I had started to reach the threshold beyond chubby to obese. I was into nerd culture, although we didn't call it that back then in the early 90's. Star Wars, Comics, Fantasy, and books. These were my interests. Above all were video games. More than any other media, video games presented me with an escape the others couldn't. Faced with the horror of what my father had become. The intense ridicule my peers laid at me. Video Games allowed me to be the hero. When Kefka laid waste to the world, it was me and my "friends" who stopped him. When Adol and Dogi went wandering through the land of Ys I was with them. Nothing else existed, these worlds, these creations made life bearable. It fueled my imagination, my sense of purpose.

As I grew up, as I matured and learned to deal with, and accept my life, my family, my place in the grand scheme of things; I knew I wanted to create these experiences for others. So I decided to dedicate my life to the creation of video games.

I wanted to create worlds of escape for the people of the world that needed it most. A safe haven to forget the harshness of reality... at least for a little while.

I learned something though in my career thus far though... unlike a book, or a comic, games are not the expression of any one person (albeit save for a few exceptions). Therein lies the rub. The medium of expression I have chosen is not one of individual expression at all. Sure there is joy to be found in the pride of job well done, a craft well executed.

Is is it though, the expression of an individual?

I don't know for sure.

There are examples of unique individuals who have done this. I applaud them. Knowing my limitations, knowing my skill. I doubt in my ability to do this. So I lay myself at the mercy of a studio. To perhaps, maybe influence a small part of a game. To maybe make something that will allow a child out there, one who is looking for an escape to find respite.

This Saturday I turn 36, the age my father was when he had his accident. I find myself looking back at that overweight kid, the one who found acceptance and escape in the fantastic world of video games so long ago. I ask myself. Have I fulfilled that desire, that yearning to create the worlds that saved me when I needed saving?

I've created levels, I've created characters, I've HELPED create games. However was it art? Were the games I played as child art? Or were they merely romanticized memories of a hurting boy?

Graphic designer James Victore says to Make work that matters, have an opinion, and love something other than yourself.

I believe I have fulfilled two of those mandates... I'm still searching for a way to fulfill the other.
Posted by Koz at 4:02 AM No comments:

So August 3rd marks my final day at Retro Studios. It is a bittersweet thought, I have learned and grown so much at Retro. Ultimately the decision to leave stems from my career goals as an individual and what I want to eventually achieve one day. The only way to do that is to seek out new challenges and continue to push myself in new ways.

So where do I go next? Well I am happy and proud to say I'll be joining Bioware Austin as a Senior Environment Artist. I am excited for the work I'll be doing there, and the challenges that I will face.

I leave Retro Studios with much love and respect. I know the next game they release will be nothing but the utmost in quality. I can't wait to see it as a fan removed from the day to day of development. I am very proud of the work I have done at Retro and Nintendo and I remain a staunch fan!

Change is exciting
Change is scary
Change is necessary to grow

Take me to church...

I started this scene LAST YEAR! I had every intention of taking it all the way to completion (textured in Unreal 4). However given the time lapse, I am sick of this scene and the last thing I need in my portfolio is another "Ruin" I'm starting on a Sci-Fi scene I'm pretty excited about so stay tuned for that. 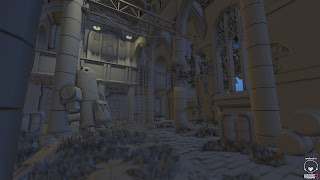 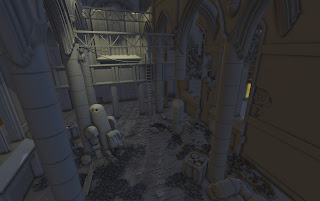 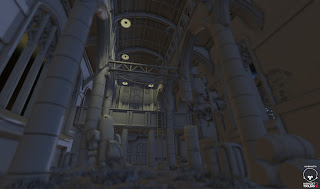 The last time I updated my page layout for my portfolio pieces was back in 2008-2009 I think. So I decided to spruce things up a bit. Instead of having a template and putting all of my pieces onto that. I'm going to customize page towards the specifics of that particular piece. This is my first one. 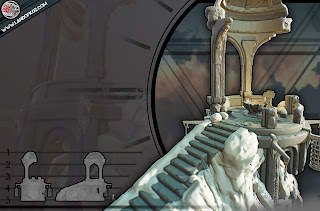 I found a really great series of videos on Gum Road by Erik Jakobsen https://gumroad.com/erikjakobsen_art I loved the concept and look. I never made a full hero piece in zbrush before (just props and individual elements). This was a great way to see a different workflow, learn some new techniques and create a pretty cool piece. I recommend checking out the video. 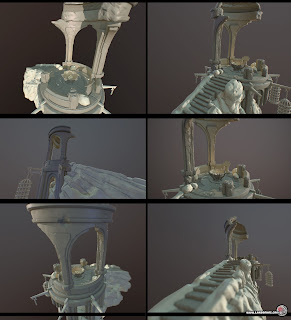 May the good blood guide you...

Whew! I'm calling this one done! This marks the first personal piece that I've taken to completion in a long while and now I remember why! It was a lot of work! Still tons more I could do too. More variation in the textures for one, more vegetation (definitely more than one tree like there is now) Overall though I'm happy with it. I learned a ton about Unreal Engine 4 while working on this. Learned a few new zbrush tricks, and some texture tricks as well.

Overall though what this project taught me the most about is ambition. I realized that most of my portfolio is large scale pieces. Very ambitious environments. That's all well and good but it's easy to get burnt out on large projects like this. In the future I think I am going to focus on smaller scale vignettes, and props. I'd rather do a REALLY well executed piece and have it stand on it's own.

Anyway that's enough musing from me! Back to playing Bloodborne!!!!

Some new work I've been jamming on in my spare time. It's based off of a structure in Portugal.

I am also in the process of expanding the scene. 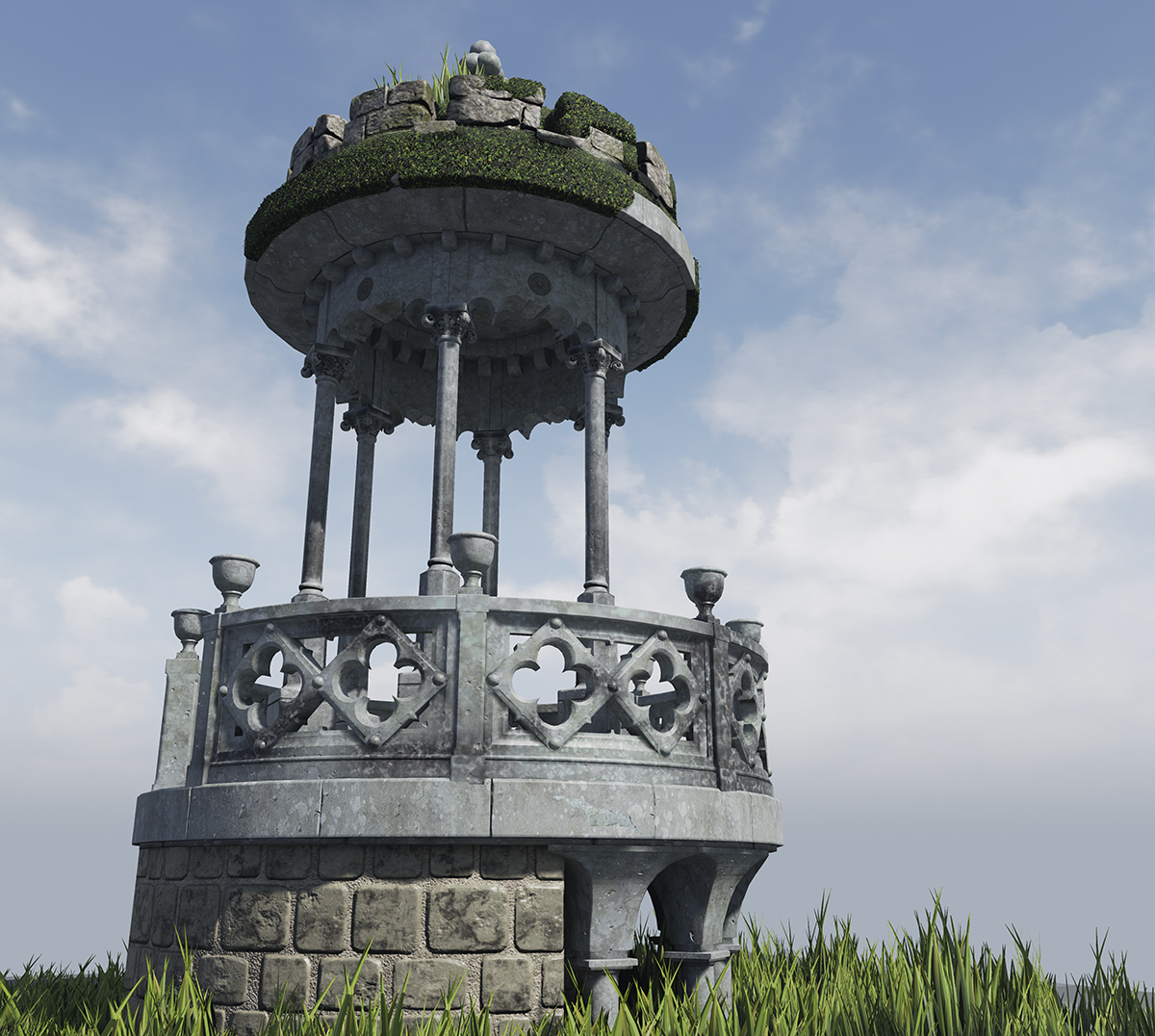 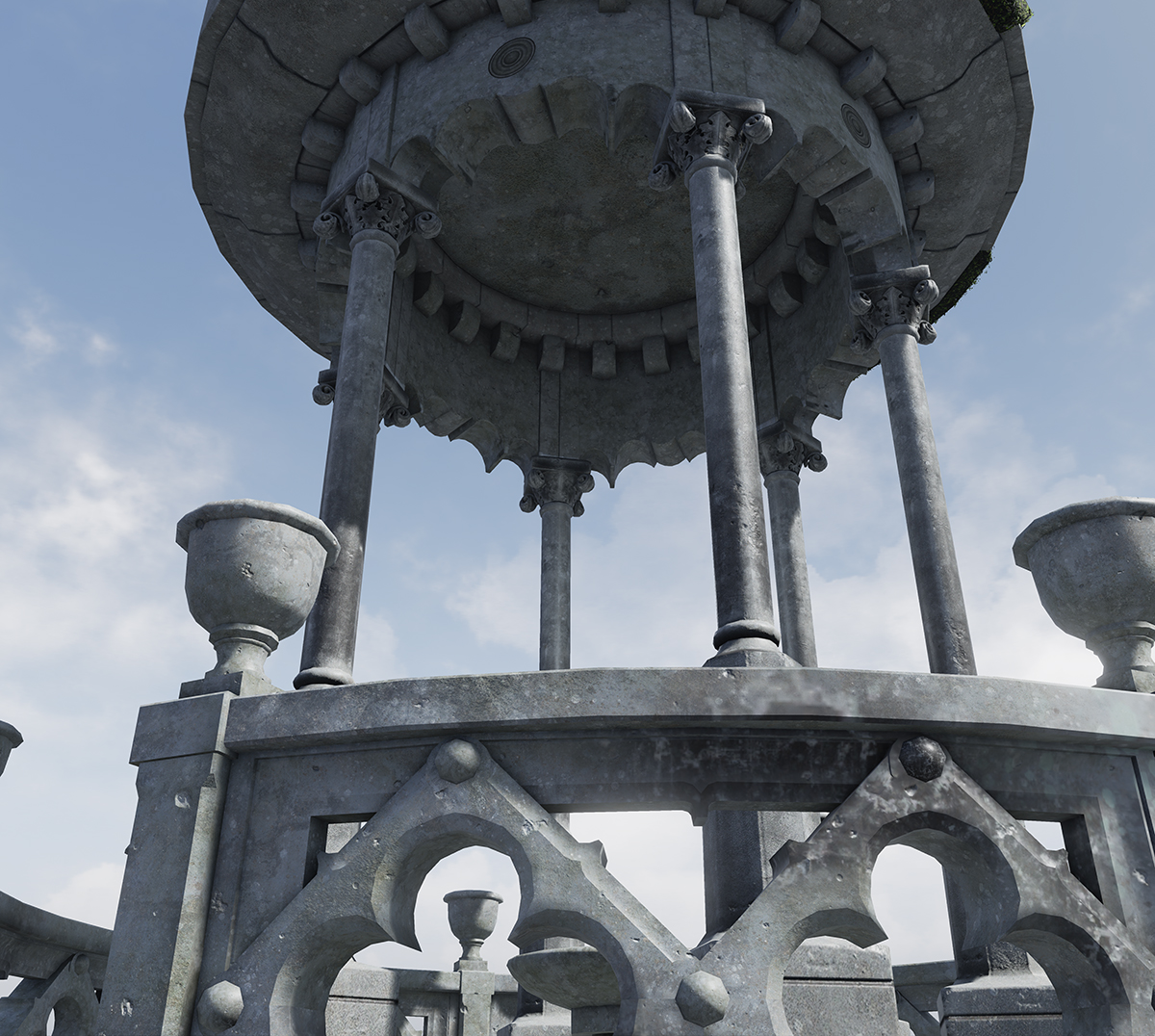 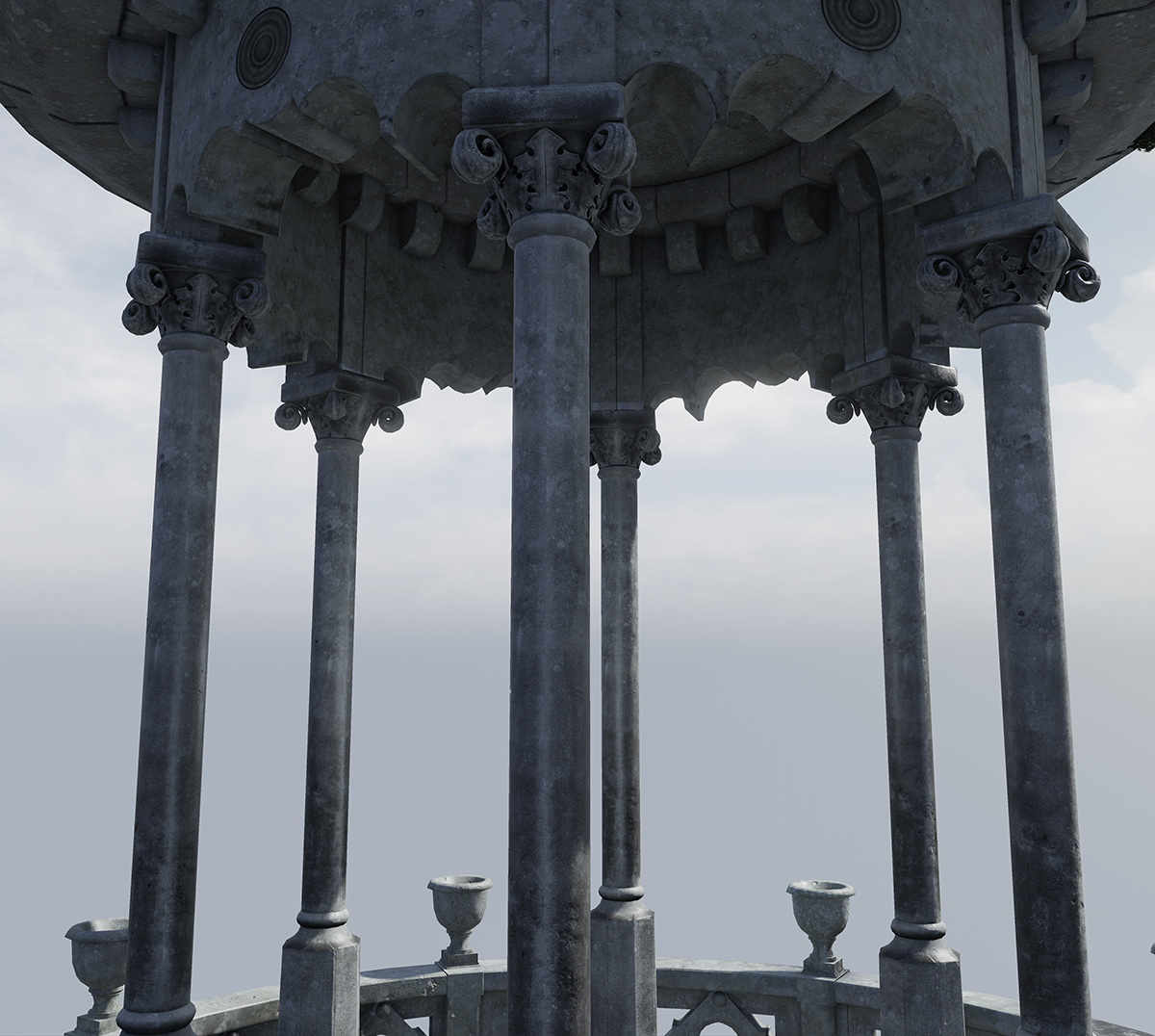 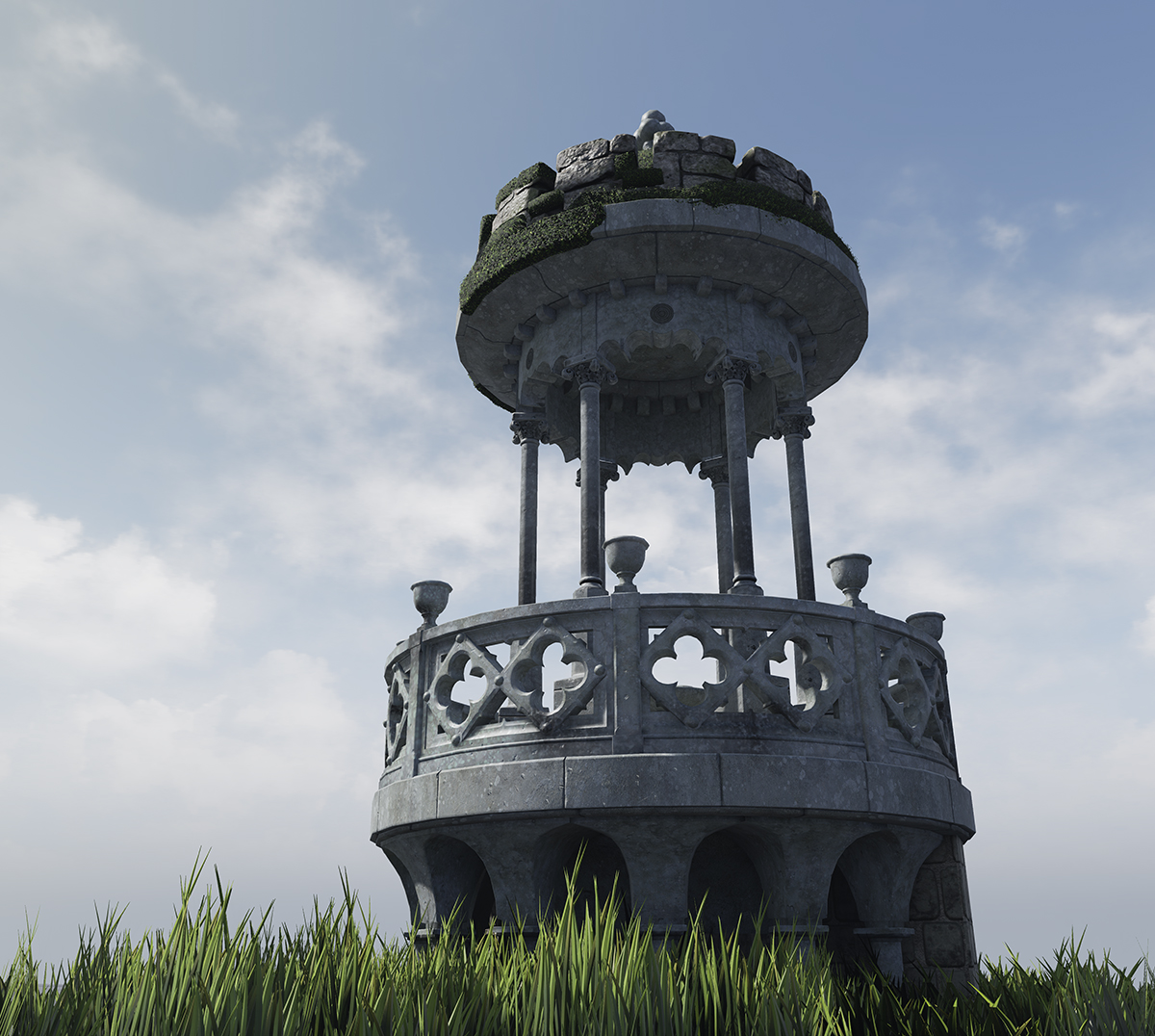 Koz
New York, New York, United States
I am an artist in the game industry, I love making video games, a dream that I've held since as long as I can remember.

Wanderers to the Land of Koz...